A series of information panels celebrating the industrial, built and natural heritage of Portlaw was unveiled to a large attendance in Malcolmson’s Square were unveiled on Saturday 19th March 2011. The information panels were commissioned by Waterford Co. Council in conjunction with the Portlaw Heritage Committee and co-funded by the Heritage Council as part of Co. Waterford’s Heritage Plan work programme. Attending the launch were Deputy Mayor, Cllr. Ger Barron, Deputy Paudie Coffey, Fr. Ned Hassett and Reverend George Cliffe. The heritage information panels will greatly add to the amenity and heritage interest of the town.
Speaking at the launch, Deputy Mayor Cllr. Ger Barron stated “These panels remind us of the wealth of heritage contained in archaeological sites and buildings within Portlaw and in the wider area. When you consider the presence of the 8th century Kilbunny Church, the medieval Rocketts Castle, Currraghmore Demesne and the industrial buildings and large houses associated with the Malcomsons you cannot but be impressed and it is only right that this heritage is publicly celebrated by a project such as this. It reminds of us of why we should have pride in Portlaw and also will serve to make a visitor’s trip to the town more interesting.” He formally unveiled the heritage panel in Malcomson Square with the oldest resident of Portlaw, Mr. Maurice Nugent.
Cllr. Barron thanked all those involved in the production of the signs including the Portlaw Heritage Committee, Heritage and Irish Officers with Waterford County Council, Bernadette Guest and Máire Seo Breathnach, Red Heaven Design, Lismore who designed the artwork, local photographer Sean O’Brien, area engineer Ken Walsh and the Heritage Council for their funding support for the project.
The Mayor went on to say “The panels will complement the ongoing work of the Portlaw Heritage Committee and the Heritage Centre and I encourage you to visit the Centre and spread the word amongst your family and friends on why they should visit the area.”
Posted by Heritage Centre at 11:39 PM

The Meaning of Portlaw 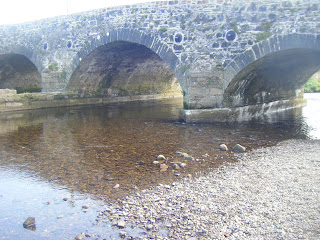 There is no problem with the derivation of the first part of the word: Port meaning a river bank. All are in agreement with this. It is the second part (the “-law”) which gives rise to a difference of interpretation. Three possibilities have been put forward over the years: The Anglo Saxon theory. Port = bank and the “law” originating from the Anglo Saxon word lagh meaning a hill. This idea is mentioned in Canon Patrick Power’s Place Names of the Deise and Canon Power’s views carry serious weight. Canon Power, however, does not take direct responsibility for the theory but attributes it to the Slieverue scholar, John O’Donovan of Ordinance Survey fame (1806-1862). The Anglo Saxon (lagh = hill) origin for Portlaw is not mentioned by Dr. Hennebry. When taken objectively on its own merits, the theory would seem to be lacking in substantial back up on the grounds that (a) given the geographical setting of the low lying Clodiagh at Portlaw it would be stretching credibility to associate its river bank with a hill - in any language. (b) Anglo Saxon as a language petered out in England in the 12th century as it gave way to the precursor of the English language as we know it - it was never at any time spoken in the Portlaw area. (c) Having one part of a place name in Gaelic and the second part of the same word in Anglo Saxon would be most unusual and not make linguistic sense. The “LÁCH” (= friendly) theory. This would give us Portlách as coming from the word lách (modern spelling) meaning friendly or simpatico. Lách being a common word which has found its way into the English of the Deise in phrases like “a decent, lách kind of a man.” The particular modern spelling (Portlách) has been accepted by the Place Names Commission, without comment on its derivation. Unfortunately the spelling adopted by the Commission is of little help in determining home exactly the name originated, in the same way that the new spelling of saol (meaning life or lifetime) gives no clue to its real origin. We have to go back to the older spelling saoghal to see the connection with the Latin saeculum (age or lifetime). It is true, however, that the lách = friendly theory has its advocates and has been mentioned by Dr. Hennebry as a possibility. However, as an epithet in Gaelic, the word lách seems to be exclusively applied to humans. Can anyone find another instance where a hill or a wood or a plain or a river bank or any geographic feature is described in place names to be lách (meaning friendly)? Furthermore – and this is important – it is clear that in the older Irish spelling the word lách (= friendly) always had a “g” in the middle – LÁGHACH. In its older form Portlaw never had a “G”-but it did have a “D”-Portcldhach. This is significant. The “Stony River Bank” theory. Portcládhach was the older written form. The cládhach possibly comes from cladach meaning a stony place by a river or the sea. The word is common in Connaught in phrases like “thíos ar an gcladach” meaning “down on the stony shore” (as opposed to the sandy beach – which is trá). The Claddagh fishing village (now part of Galway city) is a case in point. Henebry seems to favour this “stony place” explanation over the “lách” theory (Scribhne Risteird de Hindeberg). And Richard Henebry was a native of the place as well as an able scholar with his doctoral thesis on “The Phonology of County Waterford Irish” But then how can Dr. Henebry or anyone else explain the disappearance of the “d” sound in the middle of the word? Cladach to Cládhach (or clách). Not really a big problem. The middle consonant is often glossed over (with a séimhiú) in the spoken word as the Irish language evolved. Take leabhar, for example, meaning a book. In old Irish this was LEBOR (no séimhiú ) from the latin Liber. Similiarly Dé Domhnaigh (Sunday) comes from Dies Domini (The day of the Lord) but over time we put in a séimhiú and dropped the “m” sound. Máthair (mother) was originally MATIR (no séimhiú ) from the latin Mater. Fabhal (as in fabhalscéal = a fable) pronounced “foul” comes from FABULA etc. etc. To this day Irish speakers of the English language (in Waterford and elsewhere) have no trouble slipping in a “séimhiú” in an English language word resulting in the dropping of a consonant. “Gimme two Fantas, a gin and tomaha juice and a large bohel. In many rural parts, WATER is pronounced waher. MIGHTY becomes moihy etc. So there is no big deal in explaining how “cladach” could come in time to bee pronounced “cládhach (or clach) without the “d” sound. I would therefore respectfully submit – without being dogmatic – that the cladach derivation, is the most plausible of the three propositions put forward. It makes good sense – especially when to this day, you can look over the bridge at low water and by the shimmering stream you can see with your own eyes those myriads of small Clodiagh-washed stones looking up at you. They are that Stony River Bank – the Stony River Bank that tells you its name – PORTCLÁDHACH – PORTLÁCH – PORTLAW.

Posted by Heritage Centre at 8:22 PM No comments:

Email ThisBlogThis!Share to TwitterShare to FacebookShare to Pinterest
Labels: About Portlaw

Founded in 2005 the aim of the Portlaw Heritage Committee is to establish an archive of the industrial, social and cultural history of Portlaw. The Heritage Centre, located in the old dispensary building on the Square, now provides a focal point for the preservation of our unique history. Our heritage is rich covering early monastic settlements in Kilbunny, Norman fortifications at Rockett's Castle and the large demesne at Curraghmore. However, the feature which defines our village is our industrial past. We can be contacted on 00353 (0)86 1081790 between 7pm and 9pm.Why not come along and have a look?

Posted by Heritage Centre at 11:55 AM No comments: